Patents on plant genes - a lockdown for conventional plant breeding

29 June 2022 / The European Patent Office (EPO) recently granted a patent which shows why randomly generated genetic variants, e.g. triggered by sunlight (UV radiation), can be claimed as ‘technical inventions’. The patent, EP3560330, granted to KWS, covers maize with improved digestibility. It claims plants with randomly mutated genes and their harvest. It covers, in addition, the usage of naturally occurring genetic variations for conventional breeding. 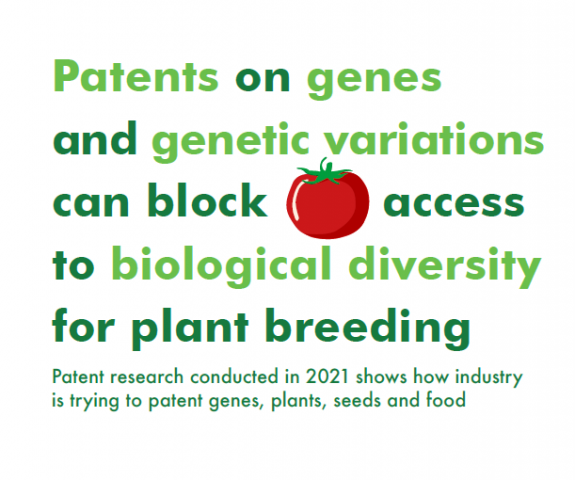 The case sets a precedent: it is the first patent to be granted under a new rule which excludes patents on conventionally-bred plants and animals. However, despite adoption of the new rule 28(2), the patent is not confined to genetic engineering, it also impacts conventional plant breeding.

“The growing legal uncertainty around patents on plants and their genes poses a serious threat to conventional breeding. These patents can block access to the biological diversity needed by all breeders,” says François Meienberg from ProSpecieRara. “Current EPO legal practice is in contradiction to what was declared as the political will of the European governments when the new rule was adopted.”

A new No Patents on Seeds! report will be published today and officially handed over to the EPO. It provides an overview of recent patent applications and patents granted by the EPO, and also outlines the legal framework. As the report shows, political decisions need to be taken to ensure freedom for all breeders to produce new plant varieties, e.g. plants that can adapt to climate change. The report also provides examples, such as patent applications filed by Syngenta / ChemChina, claiming thousands of naturally occurring genetic variations needed for breeding food plants with, e.g. enhanced resistance to plant pests.

“We are demanding that the contracting states of the EPO organise an international conference to give clear legal guidance on how to correctly interpret the prohibitions in patent law,” says Christoph Then from No Patents on Seeds!. “Our coalition has already collected more than 200.000 signatures and now will approach European governments. If the necessary political decisions are not taken, breeding as we know it will end.”

The report gives an insight into a growing patent ‘thicket’, which can become an impenetrable jungle for most plant breeders. For example, in the case of tomatoes, plant genes providing resistance against a new virus are being claimed by half dozen companies, such as Bayer and BASF, all at the same time.

“The final outcome is ‘over-patenting’, which effectively blocks access to the biological material needed in traditional breeding to generate the desired virus resistance. Until now, all breeders could freely use all conventionally-bred varieties to bring new and better plant varieties to the market. If the European governments do not take action, the patent ‘thickets’ will end their ‘freedom to operate,” warns Johanna Eckhardt from No Patents on Seeds!.

Photos of today’s activity in front of the EPO can be found here.