You can find current information in our report. 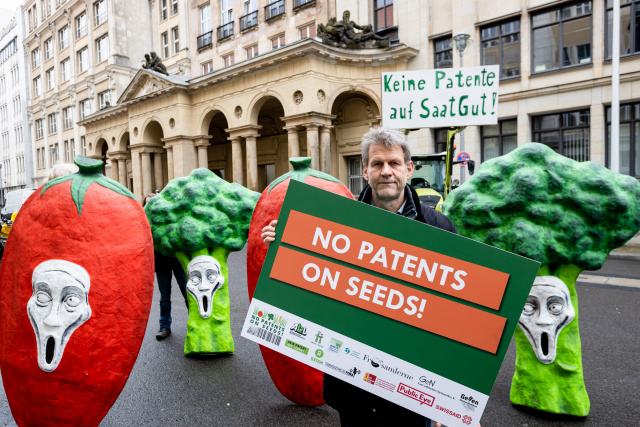 In essence, the basis for European patent law, the so-called European Patent Convention (EPC), excludes plants and animals from patentability. As Article 53(b) of the EPC reads, no patents on plant or animal varieties may be granted:

However, the European Patent Office (EPO) has very often disregarded and undermined prohibitions in the EPC, granting thousands of patents on plants and animals in recent years.

At present, in Europe, an increasing number of patent applications are being filed on plants and animals. More than 3000 patents on plants have already been granted – most of them covering genetic engineering. In the last 10 to 15 years, there has also been a steady increase in the number of patent applications being filed on plants derived from conventional breeding, i.e. not genetically engineered. More than 1500 such applications have been filed and more than 200 patents have been granted to date.

Patents on conventional breeding have nothing to do with the traditional understanding of patent law, or with giving fair rewards and incentives for innovation and inventions. Very often, based largely on trivial technical features, such patents actually abuse patent law, using it as a tool to misappropriate of biological resources needed for our daily food production.

It should be noted that the patents in this area are not limited to plants and seeds, but are also granted on the harvest, such as kernels, fruits and vegetables, and food production. For example, in 2016 patents were granted to the international companies Carlsberg and Heineken covering conventionally bred barley as well as the beer produced with it (more about the beer patents).

This development must be seen in the context of growing concentration in seed markets, food production and agriculture, globally and in Europe. In the very near future, Bayer (together with Monsanto) and DowDuPont are expected to control more than half of the global seed markets. Together with the third largest seed company, the Swiss-based Syngenta, around 60 percent of the international trade in seeds will be controlled by just three companies.

Patents are one of the most crucial legal and political mechanisms that benefit large-scale, industrial agriculture at the expense of small-scale, regional plant breeders and farmers. Put bluntly, patents put at risk the sustainability of our agriculture and our food security.

Patents on conventional breeding will dramatically change the situation for farmers, growers and breeders. In future, farmers, growers or breeders who do not sign contracts with the patent holder will have no access to the patented seeds – neither for growing, for propagation nor further breeding.

The rise in the patenting of plants is of serious concern to many stakeholders, including traditional breeders, farmers who save, multiply or even breed their own seeds or animals. In addition, developing countries might be forced to allow patents on seeds through free trade agreements. Vegetable growers and farmers will become dependent on just a very few companies. Consumers, food producers and retailers will find themselves in a situation where prices and choice in food products are decided by companies such as Monsanto.

As a consequence, agro-biodiversity will also decline if only a few companies are able to determine which patented “super seeds” will be grown in the fields. Agro-biodiversity is one of the most important preconditions for the future of breeding, environmentally-friendly agriculture and the adaptability of our food production to changing conditions, such as climate change. Seen from this angle, it is a development that is problematic not only for specific sectors or regions, but one that can threaten agro-biodiversity, ecosystems and the adaptability of our food production systems to meet challenges such as climate change. This makes it a huge risk for global food security and regional food sovereignty.

European Patent Office is serving the interests of industry only

In 2017, after protests from the public and criticism from EU institutions, the European Patent Office (EPO) adopted new rules for the interpretation of the European Patent Convention. For the first time, the EPO acknowledged that both the processes for breeding and the resulting plants and animals are excluded from patentability if the processes are considered to be “essentially biological”.

However, what is defined by the EPO as “essentially biological” is not in line with what is commonly considered to be “conventional breeding” (as the opposite of genetic engineering). According to the new rules, all plants and animals will still be patentable if they are identified as inheriting genetic variations or random mutations that are relevant for breeding.

Furthermore, there are still no provisions in place to limit the scope of patents. Under current practice, if plants or animals with specific breeding characteristics are patented, then all plants or animals with such traits will be covered by the patent, regardless of whether they are derived from methods of genetic engineering, from conventional breeding, or whether they naturally show those traits. This is an absurd situation that allows companies to monopolise a specific characteristic that could even occur in nature. The recent patents on barley and beer granted to Carlsberg and Heineken are examples of patents which, according to the new interpretation of the patent law, will also be granted in future. The companies were granted patents on barley plants that produce kernels with random mutations. The patent covers the barley, the brewing process and the beer brewed with the barley. After many civil society organisations filed oppositions against these patents in 2017, the EPO confirmed that, based on the new rules, it was unlikely that such patents, based on random mutations, would be revoked.

Our analysis of recent patent data shows that the EPO and firms are exploiting this significant loophole to continue the patenting of plant and animal characteristics – in clear opposition to the public interest and the spirit of EU law. In 2017, the EPO repeatedly demonstrated an unwillingness to engage with civil society, allowing only representatives of industry and patent lawyers to attend its discussions and access information. It is clear that a fundamental reform of the EPO is required to ensure the EPO meets the usual standards of transparency and democratic accountability to be expected of a public body in the 21st century.

What needs to be changed

There are three crucial areas that need changing to make current prohibitions of patents on plant and animal varieties and essentially biological methods for breeding effective:

It has to be clarified that the term “essentially biological processes” covers all conventional breeding processes, including random mutagenesis, as well as all individual steps in the process, such as selection and / or propagation.

2. Definition of ‘products’ used or derived from breeding

It has to be clarified that all “products” used in or emanating from essentially biological processes are captured by the exclusion from patentability, including all plant/animal parts, cells and genetic information.

3. Limiting the scope of protection

In the context of plant and animal breeding, the EPO must not grant “absolute product protection” which enables a patent on a plant or animal derived from a technical process to be extended to all conventionally bred plants with the same traits.