Patents on ‘New Genetic Engineering’ are a threat to traditional breeding

No Patents on Seeds! to protest with empty beer bottles at the European Patent Office

13 October 2021 / Europe is currently faced with a situation in which hundreds of patents on seeds might be granted in the near future. The patents on ‘New Genetic Engineering’ (e.g. CRISPR/Cas) are also an increasing threat to breeders who want to avoid genetic engineering. No Patents on Seeds! is, therefore, holding a protest against these developments at the European Patent Office (EPO) in Munich today, where they will hand over 38 empty beer bottles. Each empty bottle will contain a flag of one of the 38 contracting states of the EPO represented in the Administrative Council meeting. 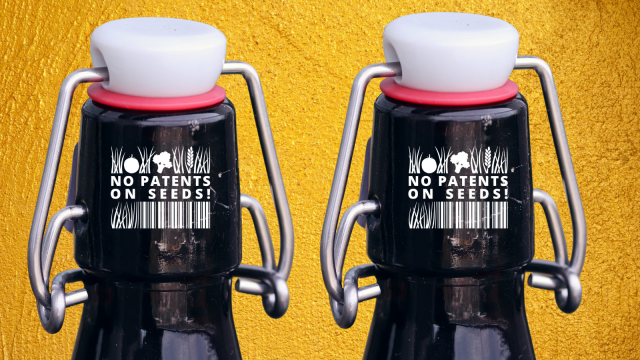 “The empty bottles are meant as a warning to the 38 contracting states to finally implement the prohibition of patents on conventionally bred plants and animals,” Giulio Carini says for WeMove Europe. “Anyone granting patents on plants such as barley might themselves soon be faced with the consequences. These patents are a threat to food diversity.”

Patent law only allows patents on technical processes such as those used in genetic engineering, but patents on ‘essentially biological processes’ are prohibited. However, the EPO also treats random mutations as patentable inventions, and have, in fact, already granted several such patents, e.g. the one on barley plants used for brewing.

In June 2021, the EPO ultimately granted a patent (EP 2373154) on barley for brewing beer and declared the plants to be a patented invention. The patent application for the barley was filed by Carlsberg – the barley itself is derived from conventional breeding methods and not genetically engineered. According to European patent law, only technical processes such as those used in genetic engineering can be patented. The EPO, however, appears to be ignoring the legal provisions: according to a document written by the President of the EPO, random mutations are considered to be equal to processes of genetic engineering. This interpretation was applied in the case of the barley patent.

“The Administrative Council, which is meeting today, needs to stop the floodgates from opening! Current EPO practice is like extending an open invitation to companies to apply for hundreds of patents on seeds, which could cover thousands of conventionally bred plant varieties. Our research shows that Bayer, Corteva, BASF, the KWS and Carlsberg are all trying to systematically escape the legal prohibitions,” says Johanna Eckhardt for No Patents on Seeds!

Many patent applications do not, in fact, differentiate between genetic engineering and conventional breeding. Rather, they claim all plants with specific genetic characteristics as ‘inventions’, irrespective of how they were generated. In doing so, they mostly refer to the potential of the CRISPR/Cas technology that can, in theory, be used to generate genetic mutations similar to those derived from conventional breeding. If such patents are granted, they cover all plants (or animals) with the described characteristics.

As the patent applications for the barley show, the real legal uncertainties and costs incurred in this situation can block breeders from providing new varieties. Breeders working in organic agriculture can, in addition, be stopped from marketing their new varieties even after decades of breeding.

Against this backdrop, the protest is held at the EPO at the same time as an Administrative Council meeting is being held. The Administrative Council consists of experts from its 38 contracting states (including states such as Switzerland), and is responsible for the correct interpretation of European Patent law. However, the Council has so far not been able to solve the problem.

Photos of the activity can be found here.

The background report Patents on CRISPR/Cas are threatening traditional breeding:

Further information on the beer patents: