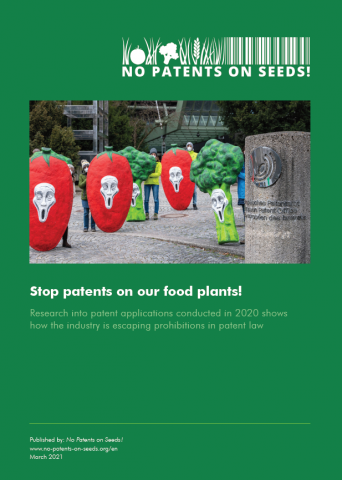 In June 2017, the European Patent Office (EPO) (➚ Glossary) decided that patents on conventionally bred plants and animals should no longer be granted. However, there are still legal loopholes: The EPO does not obey the profound differences between genetic engineering (patentable) and conventional breeding (not technical, not patentable). In current EPO practice, plants derived from random genetic changes are considered to be patentable inventions. There are already several examples showing how the legal loopholes have allowed the EPO to still grant patents, e.g. on beer and barley, melons and lettuce derived from random methods of conventional breeding.

The strategy of the big companies

As shown in the overview of patent applications provided in this report, companies, such as BASF, Bayer-Monsanto, DowDupont (Corteva) or KWS seem actively trying to exploit these legal loopholes: The companies use specific wording in their patent applications to mix technical elements (genetic engineering) with standard methods of conventional breeding to give the impression of a technical invention. If these patents are not stopped, there will be huge implications for breeders, farmers and consumers, who are all becoming more and more dependent on big companies that can control access to biological resources needed for further breeding. Therefore, political decisions have to be taken as soon as possible – otherwise the ongoing legal uncertainty will undermine our global food security.

No Patents on Seeds! wants to achieve ‘freedom to operate’ for all European breeders, gardeners and farmers involved in conventional breeding, growing and conservation of food plants and farm animals. Access to biological diversity needed for further breeding must not be controlled, hampered or blocked by patents.