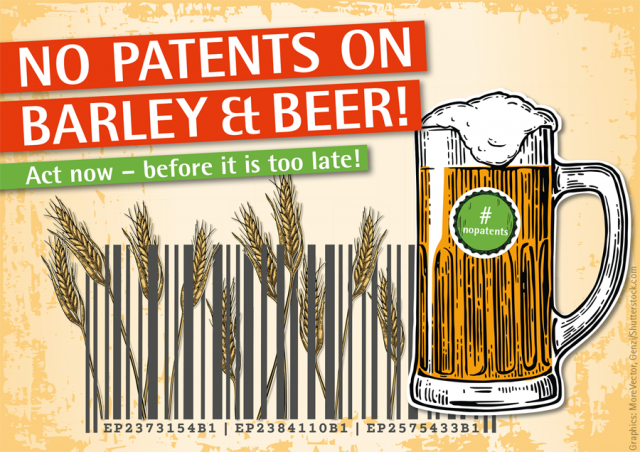 In June 2021, the EPO finally granted a patent (EP 2373154) on barley and declared the plants to be a patented invention. The barley covered by the Carlsberg patent is derived from conventional breeding methods and not genetically engineered. According to European patent law, only technical processes, such as genetic engineering, can be patented. The EPO, however, appears to be ignoring these legal provisions: according to a document written by the President of the EPO, random mutations are equivalent to genetic engineering processes. This same interpretation was applied in the case of a barley patent.

In many patent applications, no differentiation is made between genetic engineering and conventional breeding. Instead, all plants with specific genetic characteristics are claimed as ‘inventions’, irrespective of how they were generated. The CRISPR/Cas techniques, in particular, are frequently used to imitate results originally derived from conventional breeding. If such patents are granted, they cover all the plants (or animals) with the described characteristics (this is called ‘absolute product protection’ in patent law). Thus, despite many breeders wanting to avoid genetic engineering, this is increasingly under threat, especially from patents on CRISPR/Cas techniques.

As patent applications on barley show, the real legal uncertainties and costs incurred in this situation can block breeders from providing new varieties. In addition, breeders working for organic agriculture can be stopped from providing their own varieties even after decades of breeding.

No Patents on Seeds! is demanding that the interpretation of patent law is corrected without delay. The aim is to strictly confine the granting and the scope of patents to genetic engineering processes and to no longer hamper traditional breeding with patents.