Call for international conference to stop patents on seeds

No Patents on Seeds! has started a petition calling for an international conference. The organisation is demanding that a ministerial conference of the contracting states of the EPO is held within one year, with the aim of taking effective measures to stop patents being granted on conventional plant and animal breeding. In addition to stopping patents on processes of crossing, selection or random mutagenesis, No Patents on Seeds! is also calling for a prohibition on extending the scope of patents granted on genetic engineering techniques to plants and animals derived from conventional breeding. 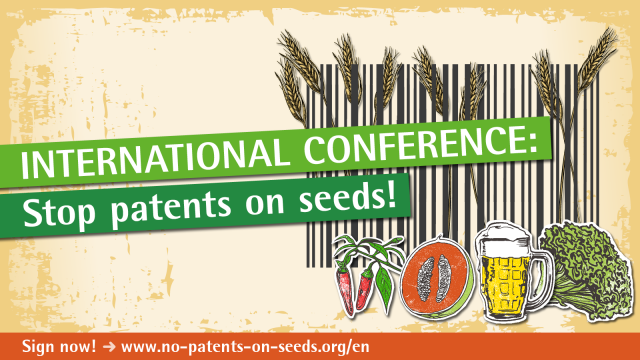 “Agricultural companies hold patents on conventionally-bred fruits, vegetables and cereals, such as barley, even though this is not allowed under European patent law. Similar patents are also being filed on animals. Conventionally-bred plants and animals are not an invention! The existing prohibitions must be effectively implemented now in order to stop the big agricultural companies from taking control of our food!” demands Christoph Then for No Patents on Seeds!.

A new rule for a stricter interpretation of the existing prohibition was adopted in 2017; nevertheless, patents continue to be granted not only on genetic engineering, but also on plant breeding based on random mutations and conventional methods. Recent examples include patents on barley, bush melons and salad. So far, neither the EPO nor officials from the contracting states, appear to be willing to solve this problem despite regular meetings at the Administrative Council of the EPO.

“There have been ongoing discussions for over ten years at the European Patent Office (EPO) on the most effective way to implement the prohibition of patents on plants and animals derived from conventional breeding. National governments now need to step in and take their responsibilities seriously,” says Johanna Eckhardt for No Patents on Seeds!. “They must take all measures possible at both a national and international level to stop patents on conventionally-bred plants and animals.”

According to the EPC (Article 4a), such conferences should take place every five years to discuss questions relating to patent law. However, it seems that no such conferences have taken place within last 20 years.