Further patent on barley and beer about to be granted

24 March 2022 / Recent patent research by No Patents on Seeds! shows that the European Patent Office (EPO) is about to grant Carlsberg (EP1727905) another patent on beer and barley. Currently, an increasing number of patent applications are being filed for conventionally-bred barley and the beer brewed thereof. Besides Carlsberg, CSIRO (Commonwealth Scientific and Industrial Research Organisation), based in Australia, is especially active in this area. The largest German brewery, Radeberger, is also among the stakeholders who showed interest in using patented barley. 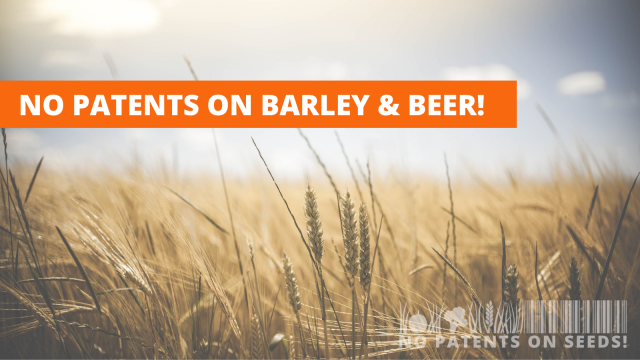 The patent about to be granted to Carlsberg is based on random genetic variations in barley that prevent the production of a naturally occurring enzyme. This is said to improve the taste and shelf life of beer. According to the patent, genetic engineering could also be used to introduce the same trait. The patent itself covers all barley plants with the desired traits as an ‘invention’, regardless of how they were achieved - and the use of the barley for brewing beer and the beer itself is claimed as proprietary technology.

“This patent clearly shows the systematic blurring of the distinction between genetic engineering processes and non-patentable conventionally-bred plants. If this distinction is not maintained, there will, in the very near future, no longer be any independent plant breeding in Europe,” Christoph Then says for No patents on seeds!. “It is a matter of huge concern if patent holders can control access to seeds. This abuse of patent law allows the comprehensive misappropriation of our daily food resources”.

Together with other organisations, No Patents on Seeds! filed oppositions against three of the Carlsberg patents in 2017. A public hearing is scheduled for one of them (EP2575433) on 10 May 2022.

Other patent applications on barley filed by CSIRO give some example of how exclusive commercial exploitation works: Radeberger signed a contract with CSIRO in 2016 for the use of its barley. The barley was grown in Australia and then imported to Europe. The barley plants were conventionally bred and not genetically engineered. Any food or drink made from the barley was meant to have a much reduced gluten content. The beer brewed from the barley was supposed to be especially suitable for people suffering from coeliac disease. This project was, however, stopped in 2019. One reason given was that market demand was too low.

Barley and beer are not the only products covered by claims in the CSIRO patents, they also cover whiskey, bread, pasta, cereals, snacks and cake. If any other beer brewing companies, food producers, breeders or farmers want to use the barley, they face serious hurdles: the barley cannot be grown, bred or used to brew beer in the same way as if no patent was registered. In contrast to regulations under the plant variety protection system, the patented seeds are not freely available for use without the permission of the patent holder and cannot, for instance, be used to breed new varieties for cultivation in Europe.

Patents on conventionally-bred plants and animals are prohibited. However, companies have been circumventing this prohibition for many years. Resistance to these kinds of patents has increased significantly in recent weeks. Breweries in Germany and Austria are among those supporting a petition calling for an international conference to be held in a bid to stop such patents from being granted. The petition has already collected more than 180.000 signatures and is being supported by around 50 further organisations. The European farmers’ umbrella organisation, COPA/COGECA, is one of the supporters.

The war in Ukraine has served to increase the urgency of these problems: Ukraine is not only crucial in the supply of wheat and oilseed, it is also one of the biggest producers of barley in Europe.

“Given the situation in Ukraine, it becomes even more problematic if our governments allow seed monopolies which hamper the breeding and cultivation of food plants,” says, Giulio Carini, from WeMove Europe, which supports the international campaign against patents on seeds. “It is more important than ever to stop companies from patenting our seeds. They have to be stopped from controlling the production of our food and deciding what breeders can grow, as such practices will significantly increase the risk of future food crises. "