240.000 signatures against patents on seeds

Protest in front of the Ministry of Justice in Berlin

23 November 2022 / The international coalition, No Patents on seeds!, is today staging a demonstration outside the German Federal Ministry of Justice in Berlin. The participants are urging the authorities to take effective measures against patents being granted on plants and animals derived from conventional breeding. Two-meter-high sculptures are erected to symbolize patents on plants, such as ‘screaming’ tomatoes, broccoli, barley and maize. All these represent a growing number of patents on conventionally-bred seeds that have been granted by the European Patent Office (EPO) in recent years.

Find photos of the event here. 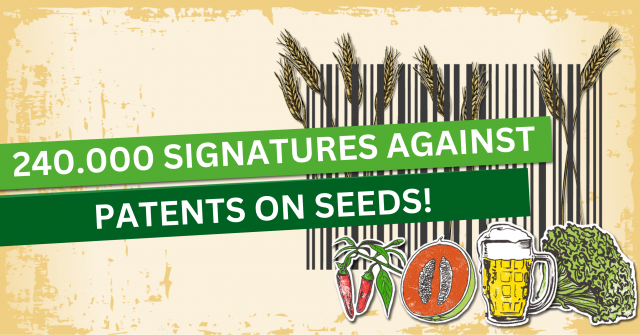 The organisations participating in the demonstration stress that patents on traditional plant and animal breeding are prohibited in Europe. The petition which aims to stop the abuse of patent law is supported by more than 70 organisations from 18 European countries and collected around 240.000 signatures.

One of the demands is a ministerial conference to be held by the 39 contracting states of the EPO, with the aim of taking effective measures to stop patents being granted on conventionally-bred plants and animals. Patents on the processes of crossing, selection or random mutagenesis must be stopped. Furthermore, any extension of the scope of patents granted on genetic engineering applications to conventionally bred plants and animals has to be prevented. Patents which concern plants and animals have to be restricted to the processes of genetic engineering.

“We are calling on the German Minister of Justice, Marco Buschmann, and the German government to take action on a national and international level against patents on plants and animals that violate European patent law,” says Christoph Then for No Patents on Seeds!. “These patents are endangering the future of our daily food: if these patents are upheld, the big international seed companies can control, hamper or even block access to biological diversity. We are demanding safeguards for the freedom to operate and breed new varieties that could, for example, help in adaptation to climate change.”

In Germany, the correct interpretation of patent law lies with the Ministry of Justice. However, right up until the last moment it was unclear whether and how the ministry would join us in the handover of the signatures. Letters addressed directly to the minister went unanswered.

The EPO recently rejected oppositions against patents on barley and beer held by Carlsberg. At the same time, they granted even more patents on maize, tomatoes and lettuce. Companies, such as Syngenta / Chemchina, are even applying for patents on thousands of naturally-occurring gene variants. They are attempting to claim both the usage of the gene variants in breeding and the resulting plants. Against this background, No Patents on Seeds! is warning against a ‘lockdown’ for traditional breeding.

Pictures from the demonstration:

The recent No Patents on Seeds! report: