European patents shall not be granted in respect of: […]  (b) plant or animal varieties or essentially biological processes for the production of plants or animals

This causes several legal problems, like for example the debatable meaning of “essentially biological process”, or, the lack of clarity whether the plants and animals derived from such processes should be patentable.

Due to this ambiguity,  the European Patent Office (EPO) has granted thousands of patents on the basis of these legal provisions in recent years, it has very often disregarded and undermined the prohibitions. 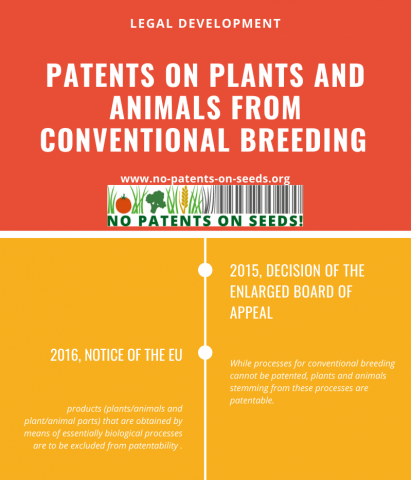 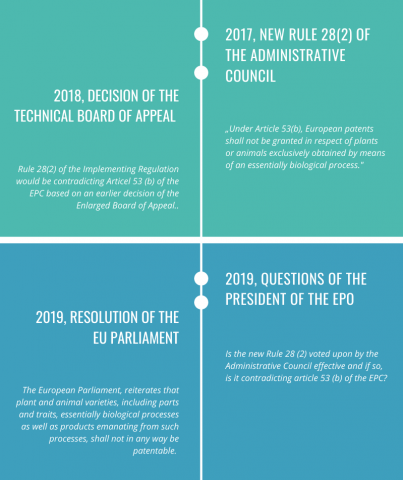 The EPO and the European Union are independent institutions. However, the European Patent Convention (EPC) includes the definition of the term ‘essentially biological’ which is based on the Patent Directive of the EU (“Legal Protection of Biotechnological Inventions” 98/44/EC). This definition (originally Article 2 (2) of EU Directive 98/44/EC and adopted as part of the Implementing Regulations of the EPC (Rule 26 (5)) is as follows:

A process for the production of plants or animals is essentially biological if it consists entirely of natural phenomena such as crossing or selection.

In 2010, The Enlarged Board of Appeal (EBA), which is the highest legal instance, argued that processes containing or consisting of the steps of crossing and selecting should be excluded from patentability as being “essentially biological”. This decision raised several questions, as it is not in line with provision of Article 2 (2) of EU Directive 98/44/EC and Rule 26 (5), EPC.

In 2015, the Enlarged Board of Appeal (EBA) decided again upon the patentability of conventional breeding:

While processes for conventional breeding cannot be patented, plants and animals stemming from these processes are patentable.

This interpretation is not only contradictory in itself, but it also undermines the prohibitions in European patent law. In response, the EU Commission issued an explanatory notice, which concluded that products (plants/animals and plant/animal parts) that are obtained by means of essentially biological processes are excluded from patentability.

Consequently, there was some urgency that the EPO should adapt its legal practice in accordance with the interpretation presented by EU institutions. In 2017 the Administrative Council of the EPO, which represents all the contracting states, added the new rule 28 (2) to the Implementing Regulations of the European Patent Convention (EPC). The decision of the Administrative Council from 29 June 2017 amending Rules 27 and 28 of the Implementing Regulations can be found here. In that regard the EPO pulished a press release on 29.6.2017. According to this rule neither the processes of conventional breeding (‘essentially biological’) nor the resulting plants or animals are patentable. However, the EPO failed to fully adopt the EU Commission`s notice. The EPO still considers only plants and animals derived from crossing and selection as notpatentable, while treating processes that concern the selection without crossing or random mutations as patentable inventions. The new rule 28(2) of the Implementing Regulations clarifies:

Under Article 53(b), European patents shall not be granted in respect of plants or animals exclusively obtained by means of an essentially biological process.

In the end of 2018, at a hearing of a case of a patent on peppers of Syngenta (EP2753168) the Technical Board of Appeal of the EPO came to the conclusion that the new rule 28(2) is contradicting the EPC because the latter is only prohibiting patents on processes but not on plants and animals. With this decision the board is following the industry’s demands to withdraw the new rule. In consequence there could be more patents granted on conventionally bred plants and animals in the future.

1. Having regard to Article 164(2) EPC, can the meaning and scope of Article 53 EPC be clarified in the Implementing Regulations to the EPC without this clarification being a priori limited by the interpretation of said article given in an earlier decision of the boards of appeal or the Enlarged Board of Appeal?

This means: Is the interpretation of Article 53 (EPC) by the Administrative Council effective by changing the Implementing Regulations (Rule 28)?

2. If the answer to question 1 is yes, is the exclusion from patentability of plants and animals exclusively obtained by means of an essentially biological process pursuant to Rule 28(2) EPC in conformity with Article 53(b) EPC which neither explicitly excludes nor explicitly allows said subject-matter?

Furthermore, the president decided to suspend all the proceedings on patents and animals from essentially biological processes until the Enlarged Board of Appeal takes a decision (see notice of the EPO) – and this was in accordance with the demands of NO PATENTS ON SEEDS! (see appeal).

Until the end of October 2019, public statements could be filed at the Enlarged Board of Appeal regarding the two questions of the president of the EPO. NO PATENTS ON SEEDS! also handed in a detailed statement. An open letter was supported by around 50 organizations and 25,000 individuals.

In September 2019 the European Parliament published a resolution on this proceeding:

The European Parliament, reiterates that plant and animal varieties, including parts and traits, essentially biological processes as well as products emanating from such processes, shall not in any way be patentable, pursuant to Directive 98/44/EC [EU – Bio-Patent-Directive] and the EU legislator’s intention;

The decision of the Enlarged Board of Appeal on the two questions of the president of the EPO is expected after April 2020. This decision will influence patent cases on conventionally bred plants and animals and it will determine the direction of the further political debate. NO PATENTS ON SEEDS! will continue to critically follow this development.