All cassava (manioc) plants, regardless of specific breeding objectives 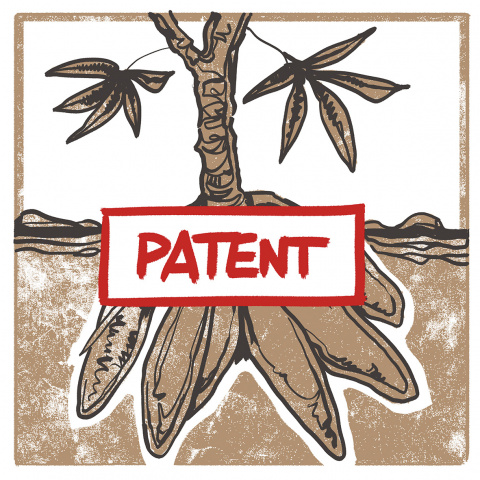 Patent application WO2019121603 covers all cassava and manioc plants (Manihot esculanta) which undergo chemical mutagenesis, regardless of which biological characteristics are ultimately achieved.

What does the company claim to have ‘invented’? The Dutch company Keygene claims to be the first to perform mutation breeding with chemicals on cassava. Chemicals are brought into contact with the plant cells. However, instead of just claiming the process of applying the chemical, the company claims all treated cells, seedlings and plants as their patented invention. Cassava (manioc) is an extremely important food in many countries, especially in Africa, South America and Asia. Therefore, if such a broad-based patent is granted, it could cause huge restrictions on breeding activity, e.g. in developing varieties adapted to new climatic conditions or able to cope with new pests.
These restrictions might also affect African countries, even if the patent is only granted in Europe, since many breeding processes involve international cooperation. Such broad-based patent claims can be seen as an intended abuse of the patent system to gain control over breeders and to misappropriate breeding resources. This example shows how important food plants are being turned into the ‘intellectual property’ of companies merely by applying simple, non-technical methods. The companies try to exploit the legal loopholes introduced by the Administrative Council in their 2017 decision, which explicitly declared random mutations to be patentable ‘inventions’.