Companies Carlsberg and Heineken want revocation of their own patent

Success for No Patents on Seeds!

4 November 2021 / The beer companies, Carlsberg and Heineken, are currently asking the European Patent Office (EPO) to revoke one of their controversial patents (EP2384110). The patent claims the barley, which was not obtained from genetic engineering methods, as well as the beer produced thereof. No Patents on Seeds! filed an opposition in 2017 because patents on conventional breeding are prohibited. The EPO rejected the opposition in 2018 and No Patents on Seeds! subsequently filed an appeal against the decision. The companies are now dropping the patent even though no legal decision has been made. Consequently, it seems to be only a matter of time before the patent is lapsed. 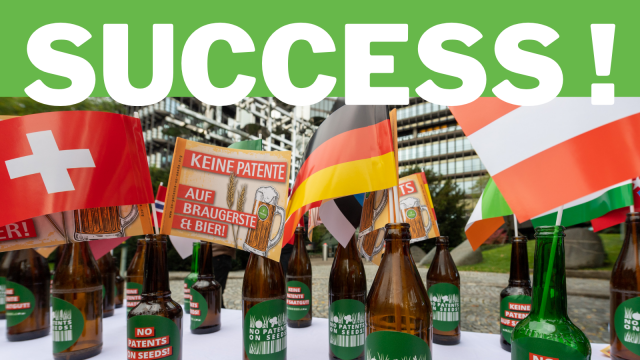 The Carlsberg & Heineken initiative comes in the wake of protests outside the EPO held by No Patents on Seeds! against patents on beer and barley. Many more breweries have in the meantime announced their general opposition to such patents. In addition, barley breeders have also voiced their opposition because the patents substantially hamper further breeding.

“This is an important step in the successful No Patents on Seeds! work. This announcement has long been awaited, but still does not go far enough. Especially Carlsberg has filed many more patent applications on barley and beer, several of which have already been granted. We are demanding that Carlsberg drops all of these patents without delay,” says Erling Frederiksen from the Danish Seed Savers.

There have, however, been no further signs that Carlsberg will drop its other patents. In June 2021, the EPO confirmed that it had granted Carlsberg and Heineken another patent on barley and beer. Thus far, the companies have always requested that their patents be upheld.

“Political decision making has to ensure that the legal prohibitions are implemented and obeyed, irrespective of any decisions on the Carlsberg and Heineken patents. The EPO has already granted several hundred patents on conventionally bred plants and is apparently not ready to stop this practice,” says Johanna Eckhardt from No Patents on Seeds!.

In this context, No Patents on Seeds! is warning that the scope of many patents frequently goes too far, in particular, those covering CRISPR/Cas gene scissor applications. Companies often intentionally try to blur the differences between conventional breeding and genetic engineering. If these patents are granted, they can also cover plants (or animals) with the same characteristics, even though they are based on random mutations and not on targeted technical interventions. No Patents on Seeds! is therefore demanding a significant reduction in the scope of patents covering specific processes of genetic engineering.

“Seed justice means that companies should only claim their real technical inventions, but not the biological resources needed for conventional breeding. From the perspective of the Global South, Europe should moreover be giving this principle priority in patent law,” says Bram de Jonge from Oxfam.

An overview of the beer patents

The activity in front of the EPO on 13 October