Still no solution for prohibiting patents on plants and animals

No Patents on Seeds! is starting an online petition for a moratorium (14 December 2020)

Today, No Patents on Seeds! is starting an international appeal for a moratorium on patent applications covering plants and animals to stop the European Patent Office (EPO) from granting more patents on conventional breeding. 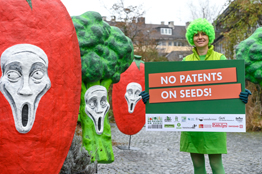 The background: the Administrative Council of the European Patent Office (EPO) will meet tomorrow. Patents on seeds are one of the issues that should be on the agenda of the representatives from the 38 contracting states. After more than ten years of controversial debate, the EPO finally decided to prohibit patents on conventionally bred plants and animals. However, patents are still granted on random mutation breeding. No Patents on Seeds! is demanding that this practice is stopped. Several hundred conventionally bred varieties have already been affected by patents in Europe.

Discussions about possible solutions have been ongoing for several months, with experts from several of the contracting states supporting the position of No Patents on Seeds!. However, it is questionable whether the Administrative Council will resolve the matter at this meeting. Therefore, No Patents on Seeds! is demaning a moratorium on pending decisions for patents on plants and animals until a permanent solution is found. The president of the EPO has taken similar measures in the past.

Katherine Dolan from ARCHE NOAH: “We demand the EPO takes urgent action to protect the common good and the interests of the broader public by stopping patent monopolies on seeds. As long as there is no solution, a moratorium should be put in place for patent applications covering plants and animals.”

According to European law, patents on “essentially biological processes” for the breeding of plants and animals are prohibited. However, there is no clear legal distinction to technical processes of genetic engineering. These gaps in legal clarity could be resolved in the decision-making process of the Administrative Council of the EPO, which represents 38 contracting states and is responsible for the correct interpretation of European patent law. No Patents on Seeds! is demanding fast decision-making to prevent large companies from taking more and more control of the seed markets.

"We are in contact with experts from several European governments and hope they will help to find a solution for a clear prohibition of patents on conventional breeding", says Johanna Eckhardt for No Patents on Seeds!.

The call for the petition (PDF)