Patent on barley and beer upheld

8 June 2021 – Munich / The European Patent Office (EPO) has rejected a joint appeal filed by NGOs against a patent on barley owned by Carlsberg (EP2373154). The patent claims non-genetically bred barley plants, their harvest and the beer produced thereof.  No Patents on Seeds! is concerned about serious negative impacts such patents can have, as these might also be granted on vegetables, fruits and other food plants. 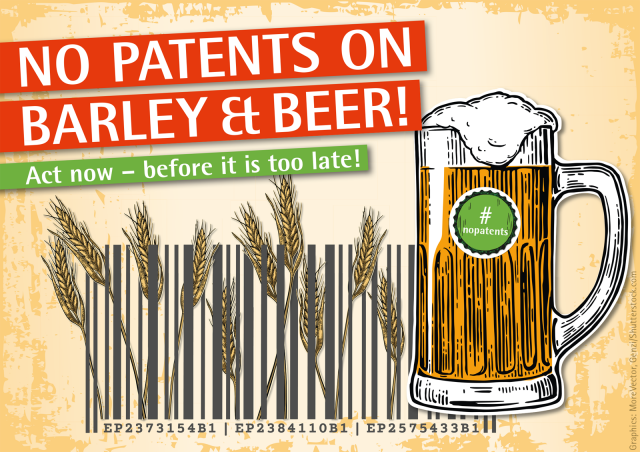 “This is a bad day not only for breweries and barley breeders but because a patent was upheld that should never have been granted. Patents like this are impacting diversity in agro-ecosystems, innovation in breeding and the interest of consumers”, Christoph Then says for No Patents on Seeds!.“ Consequently, the EPO did not raise any bar against further similar patents. Now, there might be even more patents on beer and barley in the future.”

Carlsberg has already filed around a dozen similar patent applications. To this end, the genome of barley was systematically screened for relevant genetic variations that may have useful traits. These include, for example, randomly induced mutations that influence the process of brewing and the flavour of the beer after storage. The EPO has already granted four patents, and oppositions have been filed against three of them.

The case of a German barley breeder that was made public this week, shows how patents on seeds can hamper or completely block the development of new varieties. These negative impacts can also occur without any factual patent infringement. The reason: the technical and legal uncertainties associated with these patent applications incur substantial costs for laboratory analysis and patent lawyers that are too high a hurdle for many breeders.

Karl-Josef Müller, an organic breeder from Cultivari described his situation: “After more than twenty years work of breeding barley, and just before we wanted to register our new variety in 2020, we discovered that Carlsberg had filed a patent application on barley with similar characteristics. Consequently, we would have had to shoulder not only the costs of registering our new variety, but also the costs of sorting out totally unexpected legal questions. This is something we simply could not afford.”

No Patents on Seeds! is demanding clear political decision-making: even though European patent law prohibits claiming conventionally bred plants and animals as technical ‘inventions’, there are several loopholes which must be closed. A clear line must be drawn between random mutations and methods of genetic engineering.

No Patents on Seeds! is demanding a moratorium is put in place before further, similar patents are granted and until these problems are resolved. A petition has been set up and already has around 200.000 signatures.

Spokesperson No patents on seeds!

Contact to the breeder Dr. Karl-Josef Müller from Cultivari can be provided via No patents on seeds!