Almost 200,000 signatures in campaign to demand immediate stop to patents on seeds

Meeting of the Administrative Council of the European Patent Office

29 June 2021 / The Administrative Council of the European Patent Office (EPO), which represents the governments of its 38 contracting states, will be holding a meeting today and tomorrow. Together with WeMove Europe and the Munich Environmental Institute, the coalition of No Patents on Seeds! collected almost 200,000 signatures in the run-up to the meeting. The petition was supported by over 50 organisations. They are in support of political demands to put an immediate stop to patents on plants and animals derived from conventional breeding. 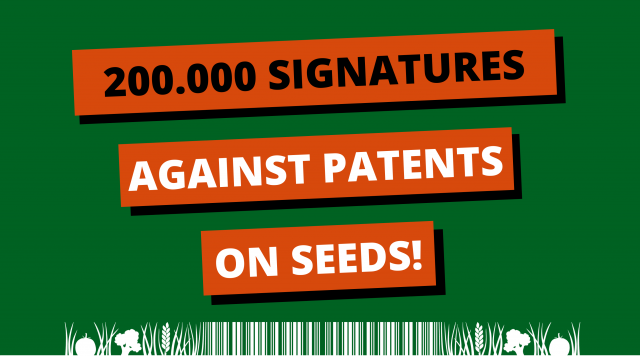 “The EPO seems neither willing nor able to make sure the law is enforced. The European governments can no longer just look the other way, but need to take action to prevent severely damaging the public interest,” says Christoph Then for No Patents on Seeds!.

Patents on conventional breeding are prohibited in Europe, but these prohibitions are being systematically evaded by the EPO. A patent was recently granted to BASF that claims bushy growth in melon plants found in a private garden. At the same time, they rejected oppositions to a patent granted to Carlsberg on conventionally bred barley.

The case of an organic barley breeder also recently attracted public attention. This breeder sees his own breeding efforts threatened by Carlsberg patent applications, which might be used to block breeding he started decades ago. In effect, this case highlights how the technical and legal uncertainties associated with these patent applications create almost insurmountable hurdles and extremely high costs for breeders.

The EPO has so far not taken action to close existing loopholes even though they have been extensively documented: for example, the EPO does not make any distinction between genetic engineering and conventional breeding when it grants patents. Furthermore, a rule adopted in 2017 to enhance existing prohibitions was overridden by introducing a new deadline for enforcement. This means it could take ten years or more until this rule can be fully applied. Even then there are serious doubts about its legal effectiveness.

“Doing nothing is not an option. If politicians now wait for another ten years or more to close loopholes, hundreds of further patents can be granted on thousands of varieties. This will severely damage breeders, agriculture and consumers,” says Johanna Eckhardt for No patents on seeds!.

The patent on the bushy melon

The patents on barley and beer

The conference of the German Ministry of Justice